No featured entries match the criteria.
For more information please refer to the documentation.

Comics that don’t hold back!

Shea Strauss is an American illustrator who depicts different life and love scenarios with humour and accuracy! Here are a few of her illustrations in 6 funny comics that show what really happens in a breakup!

That old t-shirt you hated can become like a comfort blanket!

We would have followed him to the end of the world if he had wanted! Knowing that we were completely allergic to hiking and walking…. What we won’t do for love…..

When we’re happily coupled up, we pay less attention to what our other half is saying when they’re telling us about their day at work. If we had only known, we would have been more attentive…. 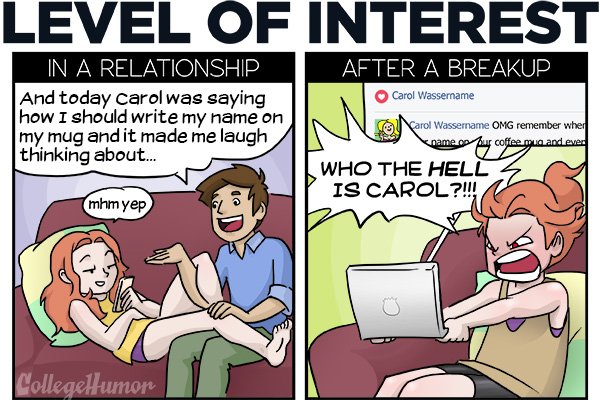 Fighting face to face…..The cyber version is much easier!

In terms of nicknames, whether it’s before or after the breakup, we know how to do it!

We may be used to saying we’re taken when a handsome stranger hits on us, except that the good news is that now you don’t have to say no! Guilt free party.

Sorry. No data so far.

Sorry. No data so far.

Womanistic is a concentrate of femininity with a hint of fashion, a lot of love, tricks and pretty drawings to celebrate girls in all their splendor!

– Science and discoveries with SciencePost

– Inspiration and DIY with Creatistic

– Tips and tricks with Granny’s Tips